The cholesterol-lowering effects of fasting

Is it possible to lower cholesterol without taking medication? What effect does intermittent fasting have on cholesterol?

High cholesterol is regarded as a major risk factor for serious heart disease. Cholesterol is typically classified into two types:

A general cholesterol test result that is not divided into LDL and HDL does not provide much information. Triglycerides, a type of fat found in the blood, are also measured as part of the cholesterol test. This form of fat is stored in cells and circulates freely throughout the body. Triglycerides are broken down into free fatty acids and glycerol during fasting. These acids are used by the body to generate energy. Triglycerides are therefore the form in which energy is stored. Cholesterol, on the other hand, is required for the repair of cell walls and the production of certain hormones.

High cholesterol and triglyceride levels have been linked to heart disease since the early 1960s, according to research. However, this relationship is much weaker than is commonly assumed. When LDL and HDL levels were measured separately, the relationship shrank even more. Because cholesterol was present at the sites of plaque formation, it seemed logical that high blood cholesterol had a significant effect on artery-clogging.

A question was raised about the cause of high blood cholesterol. It was initially thought to be due to a poor diet. This theory has long been debunked because the liver produces 80 per cent of the cholesterol in the blood. All subsequent research has shown that increasing cholesterol consumption does not affect blood cholesterol levels.

It took many years for this information to reach the general public’s consciousness. It was not helped by the attitude of dietitians, who had been warning for years about the dangers of consuming cholesterol. But what happens if the cholesterol consumed does not raise its blood levels?

The idea behind lowering cholesterol was to reduce dietary fats, particularly saturated fat. It does not produce the desired result, but many people remain convinced of it to this day. Similarly to cholesterol consumption, research has clearly demonstrated that there is no relationship between the amount of fat consumed and the level of cholesterol.

Many people attempt to lower their cholesterol by introducing a low-fat diet, despite the fact that this method has been shown to be ineffective. Meanwhile, research shows that intermittent fasting is the most effective way to significantly lower cholesterol levels. 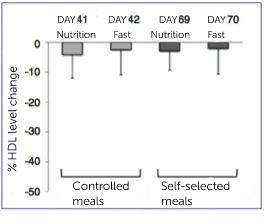 Low HDL levels increase the risk of cardiovascular disease because “good” cholesterol has a protective function. This link is much stronger than the one found with LDL cholesterol. It’s important to remember, however, that HDL levels are only a symptom of disease. Drugs that raise HDL levels alone do not protect against heart disease, just as dyeing your hair does not make you look younger.

We monitor HDL levels because they can indicate an illness, similar to how a fever is often the only visible symptom of an infection. If your HDL levels are dropping, it could mean something is wrong with you. What effect does fasting have on HDL levels? As shown in the graph below, intermittent fasting for 70 days had little effect on HDL levels. 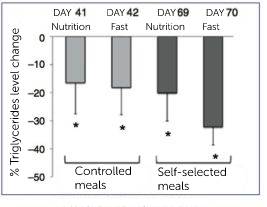 What role does diet play in triglyceride levels? The level of triglycerides dropped by as much as 30% during intermittent fasting. Diet has a big impact on triglyceride levels. However, lowering your triglyceride levels does not require a reduction in the amount of fat or cholesterol you consume. The main cause of this phenomenon appears to be a decrease in the number of carbohydrates consumed in the diet.

What happens to LDL levels when you fast? It will certainly plummet dramatically. The reduction in LDL levels was approximately 25% after 70 days of intermittent fasting. Of course, some medications can reduce it by up to 50% or more. It turns out that simply changing your eating habits has an effect half as strong as the most powerful medications currently available.

Why does fasting work where traditional diets fail?

Simply put, your body switches from burning sugar to burning fat when you fast. Because free fatty acids (FFA) are oxidised for energy, their synthesis decreases (the body burns fat instead of storing it). Reduced triacylglycerol synthesis leads to decreased VLDL (Very Low-Density Lipoproteins) excretion from the liver, which helps to lower overall LDL levels.

Allowing your body to burn LDL is one way to lower it. Low-fat diets make the mistake of providing sugar to the body, which prevents it from burning fat.

To summarise, fasting has the following consequences:

All of this will undoubtedly be beneficial to your overall health. Will it lead to an improvement in the cardiovascular system’s condition? You can probably guess. Except for a few kilos, there isn’t much to lose.